Day two of our trip to Rubondo started early as I woke in search of a good sunrise. The weather was a little cloudy with a distant storm across the lake and the sound of hippos in the bay. 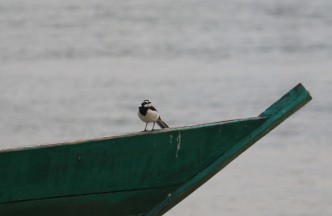 One disappointment was the lack of birdlife – having been told Rubondo was a haven for birds we had seen few.

The day ahead was to consist of a morning walking safari followed by an afternoon boat safari. As Anita was a little under the weather she stayed behind, two of our part had gone fishing leaving 10 to head out into the jungle. In truth we saw little in the first hour or two, though the scenery was pleasant an there were plenty of butterflies and beetles. After a a couple of hours we reached a lookout with some great views over the lake and a nearby lagoon We stopped for rest and then proceeded down to the coast.as we travelled we were near deafened by the sound of cicadas chirping in the trees. We them emerged at the shoreline. Here was another lookout tower which gave a much closer look at the self-same lagoon we had seen earlier. Here open billed storks, egrets, ibis and other water birds gathered. Then in the lake we spotted them – crocodiles. Moving cautiously to get a closer look at the still distant reptiles we came to marshy ground. We watched for several minutes as one of the crocs hauled itself onto land and gaped. It was an  enormous beast even from a distance. 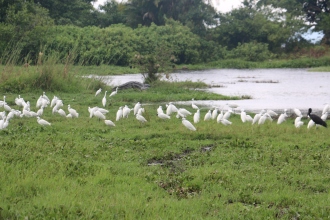 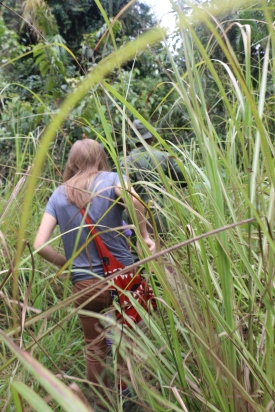 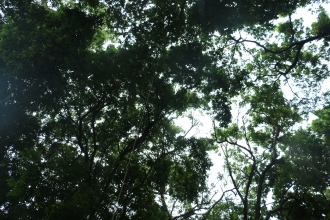 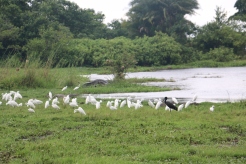 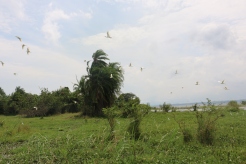 As we turned to leave, we saw another creature feeding behind us in the long grass, a hippo. The round beast fed forces while and then spotted us between it and the water. We moved a little to one side and took some snaps , one amazing  picture of the hippo looking straight ahead with a running bushbuck behind. The hippo turned back into the trees! 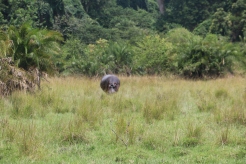 Our journey back to camp took us past an area of burned out boats (poacher boats which had been confiscated and then purposely damaged, their occupants presumably arrested and sent to court).

Returning to out base we discovered to put disappointment that the boat safari was cancelled due to rough water. A change of plan meant a relaxed afternoon and a decision to do a Game Drive in our last day. 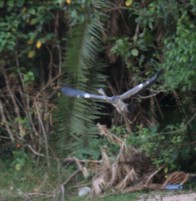 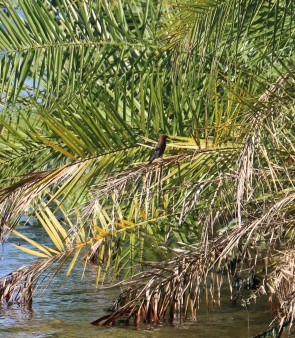 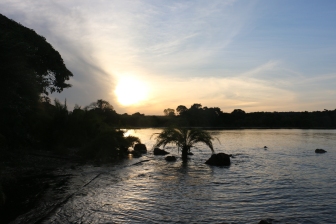 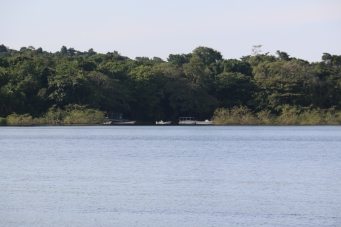 After the hippos of the night before tonight we spotted the reflecting eyes of crocs in the bay. West by the fire and watched as one approached and from a distance came shore enticed by a fish head. The crocodile at close quarters was awesome. It was still enough to get some good low exposure pics, but stealhily every 10 miins or so as torch light moved elsewhere it approached. Eventually fearing it was getting too close the reptile was warded off by fire and slunk back into the water. 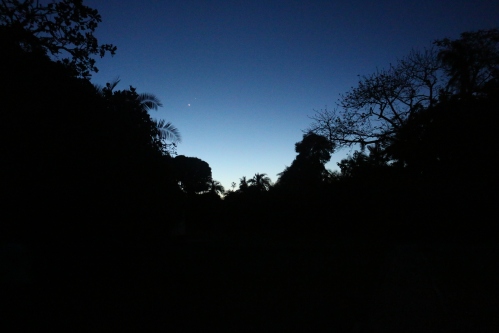