Today we arrived back in MK my home for 26 years prior to moving out to Mwanza. We are staying on a campsite to the north of the city.  A picturesque landscape of woodland and lakes near Olney. 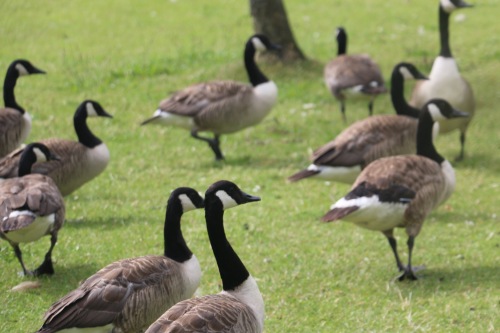 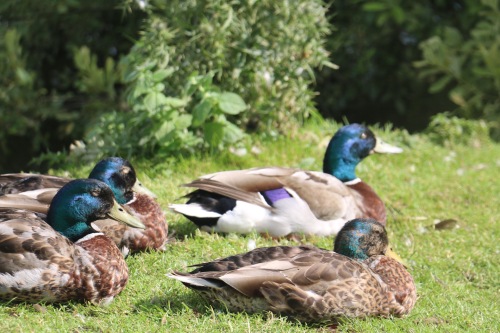 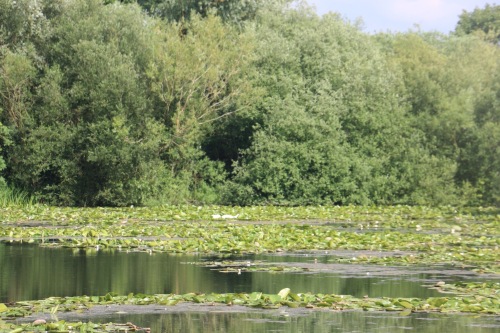 It’s the first time back in MK and a great opportunity to catch up with old friends.

We’ve actually been back in the UK a week now. Surprisingly it has not been the culture shock we anticipated – for me I have slipped back into the UK environment with no real surprises, though it has felt a bit cold. Maybe the 40+ years of UK living have made the experience much more ‘normal’ than I expected after two years on the equator. ​

Having initially stayed with family near Abingdon it gave  an opportunity to visit ex-colleagues in Thame and it was good to catch up and see them. Life has changed little, it seems, though perhaps I detect a slightly greater pressure on all as they embrace the challenges of the British Education Reforms – something I am glad to have escaped.

This week a chance for the kids to catch up with school friends and us all to meet church friends and wider MK friends as well as family. It also gives us a chance to sort out things for our son’s impending entry into University. MK’s reassuring familiarity is a real bonus.

We woke up to most on our mountain top campsite. It has been a cold clear night (amazing stars in the pitch black before we turned in), but we had wrapped up warm. After an early breakfast we were off away from
Ngorogoro and back to Serengeti. We had two animals on our shortlist today – Cheetahs and Leopards. During the morning the once exotic now familiar mix of Zebra, Wildebeest, Thompson’s and Grant’s Gazelles, Warthogs, Hyenas, Lions and Giraffe were all their. Hartebeest, Waterbuck, Ostrich, Bustards and Secretary Birds added to the mix.

Giraffe and Zebra on the plain 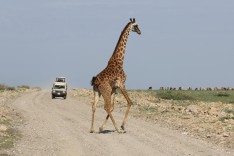 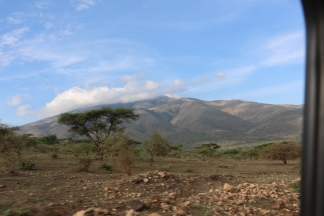 By early afternoon we were in Serengeti – still only magnificent Lions were representing the big cats – great as they were we wanted more. Just before lunch we saw a tree we thought we might have seen a Leopard – wishful thinking – nothing there! Then at lunch others said a Leopard was there so we returned – all we saw was a dead Impala high in the branches no
Leopard 😒. We drove on disappointed. Two miles or later there was a convoy of parked vehicles (a sure sign of something). We assumed it was Lions or perhaps Elephants – but no it was a Leopard, legs dangling on a branch 😌 but very hard to see. I needed maximum zoom snd a touch of overexposure and a severe zoom in on my screen display, to make it out but yes it was a leopard 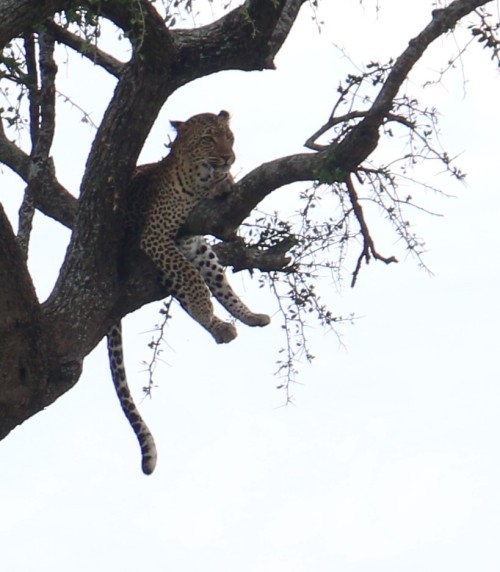 A great way to finish off before we headed back. In the end no Cheetah’s – yesterday’s failed encounter foiled by the height of the grass that hid our ‘prey’. However one further treat was a river with Crocodiles and Hippos and a glimpse of a Monitor Lizard at the end! 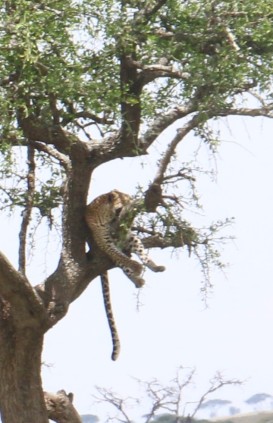 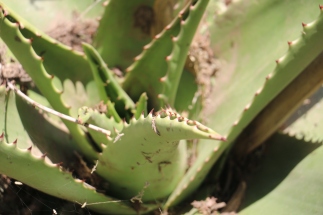 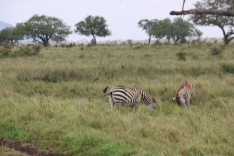 Zebras in the long grass 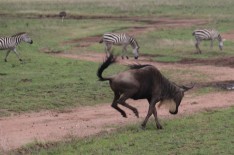 Lions in the Long Grass 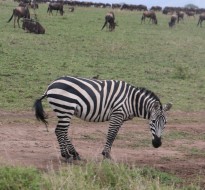 As I write this we’re still in Serengeti but heading out (just seen the Monitor!).We have had a fabulous three days and many great memories to last long in the mind.

Camping by the Lake

This weekend we have left Mwanza and travelled a short distance up the coast at a place called St Dominic’s Annex Beach. We are here with the school borders on a camping weekend. Given this morning’s weather this is either brave or foolhardy.
Having said that it’s nice to leave the town and experience a little bit of rural Tanzania.
Currently the borders sure help ping to prepare an evening meal (Spaghetti Bolognaise)

There are numerous bugs here attracted by the light, otherwise it’s a lovely spot and provided you keep away from the strip lights it’s fine.

There have been signs of a storm way out across the lake and I would really like to see one for real (rain free of course).

Some pics when the reception improves.

We are lucky that on both campsites ( Newquay and here in Cheddar) we have had the option of Wifi. This has been great especially for the blog :-).
Even so there are limits!

END_OF_DOCUMENT_TOKEN_TO_BE_REPLACED

We’re All Goin’ on a Summer Holiday

A day later than planned but finally packed up and out of house it’s time for a bit of R ‘n’ R. We are off to Newquay for a week camping, followed immediately by 3 days of the same in Cheddar. We will join family in Newquay and meet family in Cheddar. It’s such a relief to have something else to do other than pack. Apart from the fact we’ve just packed up the car for a week away 😉
Let the holidays begin! 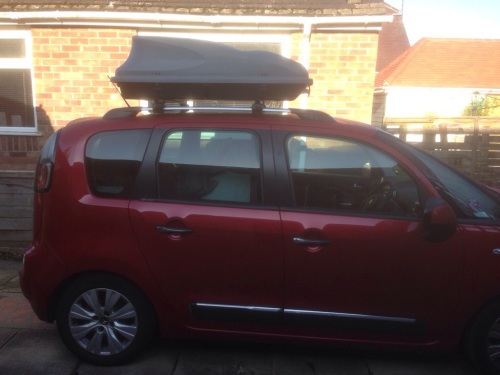 We have travelled to the Vendée Region in France on two occasions and both times staying on the same site Le Pas Opton.

Find out more by clicking here 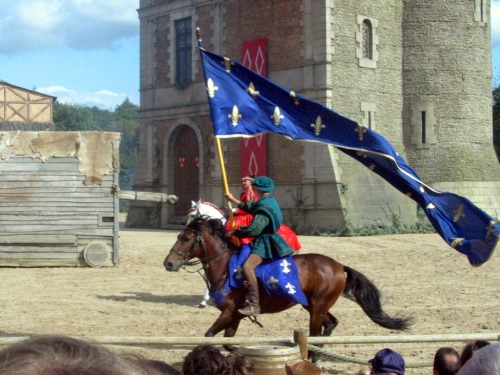 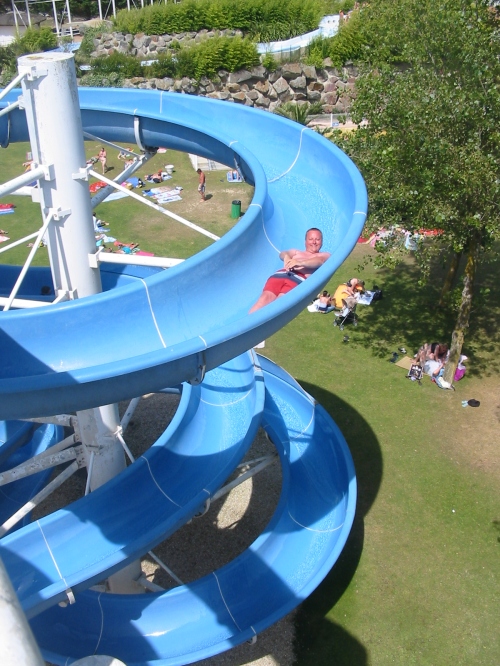 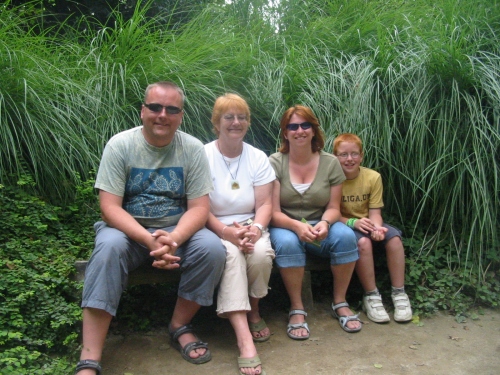 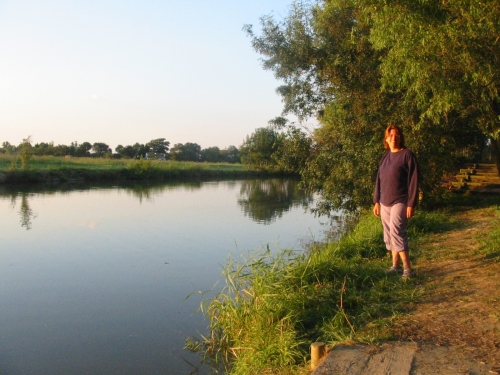