I always wanted to go abroad and after years of family camping trips, my first trip was to France on a  school French Exchange at 14 and a 2nd one at 15 – my French was rubbish (later proved by my ‘U’ grade at ‘O’ level) and I think I probably did more English talking than French as my pen-friends’ grasp of English was SO much better than my French!

Then with my church youth group, we went to Austria (by coach) and had a great week away.  Here’s the only photo of me I can find – dressed up for a ‘ backwards meal’ where we had to put our clothes on back-to-front and we ate a 3 course meal starting with dessert!!! 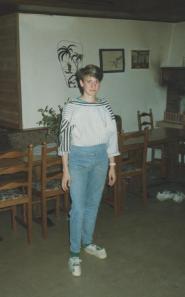 The first time I flew on an aeroplane was to Canada in September 1991.

I flew from Canada to Jamaica and spent 6 weeks there,

before returning to Canada – and enjoyed a White Christmas, ice-hockey and cross-country skiing.

One response to “Anita’s Travels”