Posted on October 1, 2014 by mwanzatiggerific | 3 comments

Most of these were taken in our garden!

The Tree At The Back Of The Classroom

The tree at the back of the classroom provides shade and is a popular resting place for the monkeys and birds. Or rather it used to, for today it has gone.
Following heavy rain early this morning the tree (rotten through at its base) crashed on to the road outside – luckily no one was injured. It was a big tree and must have been there many years. The view from the windows has enlarged markedly, but it was a shame. 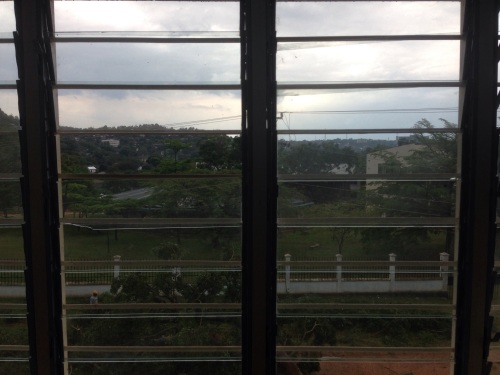 The whole road was blocked and as a result staff and students were delayed. Within half an hour or so half a dozen or so Askaris (watchmen) were at it with machetes and an axe and were carving at the wood.

By lunch the road was clear with the remaining trunk left leaning over the fence – to be cleared another day. All this without the aid of a chainsaw.

For those who might wonder, no students were harmed in the taking of these pics, snapped during a non-teaching lesson, at break and while students were engaged in research activities.

Last Wednesday, my flute was stolen from my bag whilst walking to my language class 😦 It was a stark reminder to me that I must not walk with valuables visible – seeing the flute case poking out of the top of my bag was obviously too much of a temptation for the thief. The irony is that there isn’t really a market for flutes here, so it was a useless theft.

The thief was caught and given a severe beating from the observers of the crime (many of whom attend the secondary school right where it happened). He was then taken to and held in the local police jail.

On Thursday morning I went to the police station, with one of the staff from the school, waited for about an hour and then was told to return the following day, as the officer in charge of the case wasn’t in.

Friday morning, I went back and together with two police officers, the thief and a local expat friend (who acted as my translator) we returned to the scene of the crime, with the intention of talking with the witnesses who attended the school there for information about the possible whereabouts of my flute. However, it seemed to be an inconvenient time at the school, and the police suggested we come back an hour later. Unfortunately, this resulted in us returning at probably the worst possible time – the children and their parents were all outside where a class of children were performing songs and dances! So back we went to the police station and I was told to return on Monday morning.

Later that same day, I was walking back the same path going to language school, and as I came to this school, many of the children surrounded me, and even with my limited Swahili I understood that they were talking about the mugging. Then several children took my hand, said “Njoo!” (come!), and led me to where 4 of their teachers were. They knew all about the situation, and I asked if they could help me by telling the children that the flute was still missing and to look for it, and if anyone found it then they would get a reward. I showed them a picture of the flute as most people aren’t familiar with a flute, so they would know what to look for. The teachers were very happy to help and encouraged the children to look for it.

I left the school to continue on my way to language school, and a group of 20+ children walked most of the way with me, as if to keep me safe, which was really encouraging.

Today I returned yet again to the police station together with another member of staff from the school, and as the flute seems to have completely vanished, and the thief isn’t able to shed any light on its whereabouts I agreed to drop the case.

Although the mugging was a shock, and I was absolutely gutted that my flute was taken – especially as I was due to play with 2 others at the school dinner-dance held on Saturday night – but I felt the theft was purely opportunistic by someone who hoped it was a laptop / camera or other valuable & trade able item, rather than malicious towards me. I still walk the route daily but do ensure nothing potentially interesting to a would-be thief is visible.

Many thanks to everyone who has emailed or commented about this situation. I’ve much appreciated your encouragement and concerns, during this difficult week.